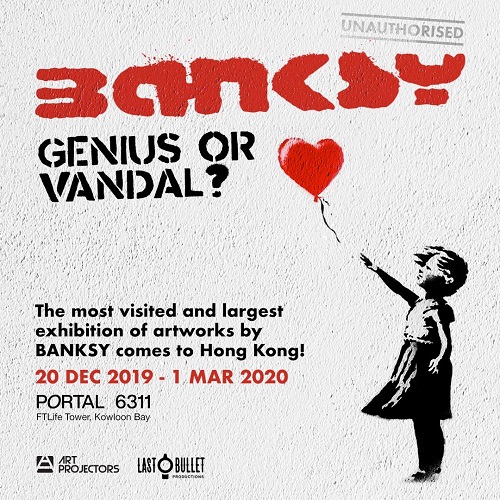 Genius or Vandal? The public decides.

Slippery, provocative, mysterious.... Banksy, the British artist whose identity is still unknown, is considered one of the main contemporary street art icons. His art, many times satirical, address universal issues such as politics, culture or ethics. The aura of mystery that, by choice and necessity, is perpetuated every time Banksy is mentioned, makes him the mythical figure of our time.

From asphalt trenches, Banksy has challenged the rules of the contemporary art game. His visual protest connected with a huge and heterogenous audience and today he is one of the most recognized and admired amongst younger generations. 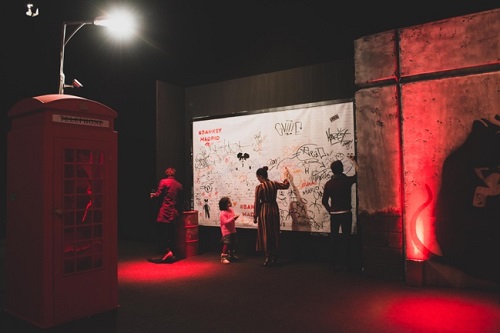 Organized by Art Projectors Hong Kong in partnership with Last Bullet Production and HKPI, “Banksy: Genius or Vandal” arrives in Hong Kong after an unprecedented success in Moscow, Saint Petersburg, Madrid, and Lisbon where it was visited by over 700.000 people. Hong Kong will be the first city in Asia to hold this exhibition, and more cities to be announced. “BANKSY: Genius or Vandal?” will be in exhibition between 20 December 2019 and 1 March 2020.

An impressive audio-visual installation especially created for this show greets the visitor on arrival, revealing clues about this mysterious artist, highlighting his most important pieces and framing his unusual career. Amongst the most widely recognized works in the show is the silkscreen of the Girl with Balloon series, like the one destroyed by the artist in an unprecedented action at Sotheby’s London auction house.

This exhibition, as all that have previously been dedicated to Banksy, is not authorized by the artist, that continues to pursuit his anonymity and his independence from the system.