The Ultimate Oktoberfest Experience to the Heart of Hong Kong 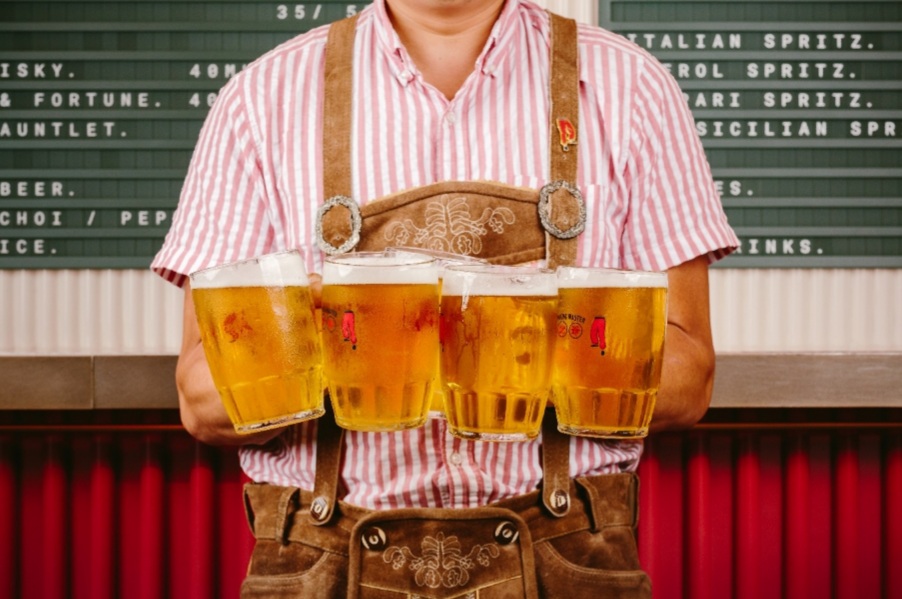 BaseHall, the multi-concept food hall in Jardine House, is partnering with home-grown microbrewery Young Master Ales to bring a truly authentic Oktoberfest experience to Hong Kong. For just one weekend, on Friday 23rd October and Saturday 24th October the dynamic food hall will be transformed into a traditional Bavarian beer tent to give revellers a real taste of Munich without having to get on a plane.

“Oktoberfest is such an integral part of Bavarian culture, and this is our way of bringing it to a Hong Kong crowd in a fresh and contemporary way,” says Tom Andrews, Senior Asset Manager at Hongkong Land Limited. “With BaseHall, our aim is to create something unique for the Hong Kong dining scene, and in line with this, we’re excited to offer the most complete Oktoberfest experience in the city. Our partner, Young Master Ales, is brewing an exclusive Oktoberfest larger while our food vendors are busy creating German-inspired snacks. Along with transformative décor and traditional activities, we are aiming to create as close to the real thing as Hong Kong can get.”

Food and drink are at the core of Oktoberfest, and BaseHall will be delivering on both fronts. To honour the festival’s traditional beverage, Young Master Ales have been working hard to perfect their light, crisp Oktoberfest Pilsner, which will be available exclusively at the event. Alongside this exclusive brew, the full line-up of Young Master Ales’ beers will be available on tap, including the 1842 Island IPA, Fleeting Clouds Wheat beer, and the Hak Mo Sheung Double Chocolate stout. As a palate cleanser, a choice between Peach and Butterscotch schnapps will be on hand, too.

To accompany the drinks, each of BaseHall’s eight food vendors has created an exclusive menu of bites inspired by the fare usually found at Oktoberfest. In a nod to the popular German street snack, BaseHall Bar will be dishing up authentic currywurst, while Treehouse have created a very apt Sauerkraut Pizza, using vegan cheese and CBD beer braised cabbage for a wellness-inspired twist. Some of the Asian-centric vendors have really flexed their creative culinary muscle to complement the German theme, offering dishes such as a Sotong Pretzel by Return of Lemak and a Banh Mi Xiu Mai from Vietnamese eatery, Cô Thành.

Traditionally, Oktoberfest festivities kick off with the tapping of the cask ceremony. Here, the Mayor of Munich taps into the year’s first cask of Oktoberfest beer – when he declares “O’zapft is!” – “It is tapped!” in the Bavarian dialect – the festival officially begins. The tradition began in 1950 with former Mayor Thomas Wimmer, and in keeping with it, each day of BaseHall’s Oktoberfest festivities will include a cask tapping at 7PM.

To further the authentic atmosphere, BaseHall will also be hosting a series of other beloved Oktoberfest activities that are sure to thrill. Festival-goers will have the chance to test their strength at the beer stein holding competition and indulge in gingerbread lebkuchen cookies. During the day, numerous family-friendly activities will be available, including cookie decorating with Cookie DPT.

The first Oktoberfest was held in 1810 to celebrate the marriage of Crown Prince Ludwig and Princess Therese of Saxony-Hildburghausen. The original festival centred around a horse race held at Munich’s Theresienwiese, a field which was named for the new princess. Now, the celebration has developed into a two-week folk festival that draws millions of people and serves over 7 million litres of beer each year. Oktoberfest is still held in the same fields as the original festival, and for that reason, locals refer to it as d’Wiesen.

By honouring the history and traditions of Oktoberfest and offering as authentic an experience as possible, BaseHall will cement its place as the go-to destination for Oktoberfest celebrations in Hong Kong for years to come.