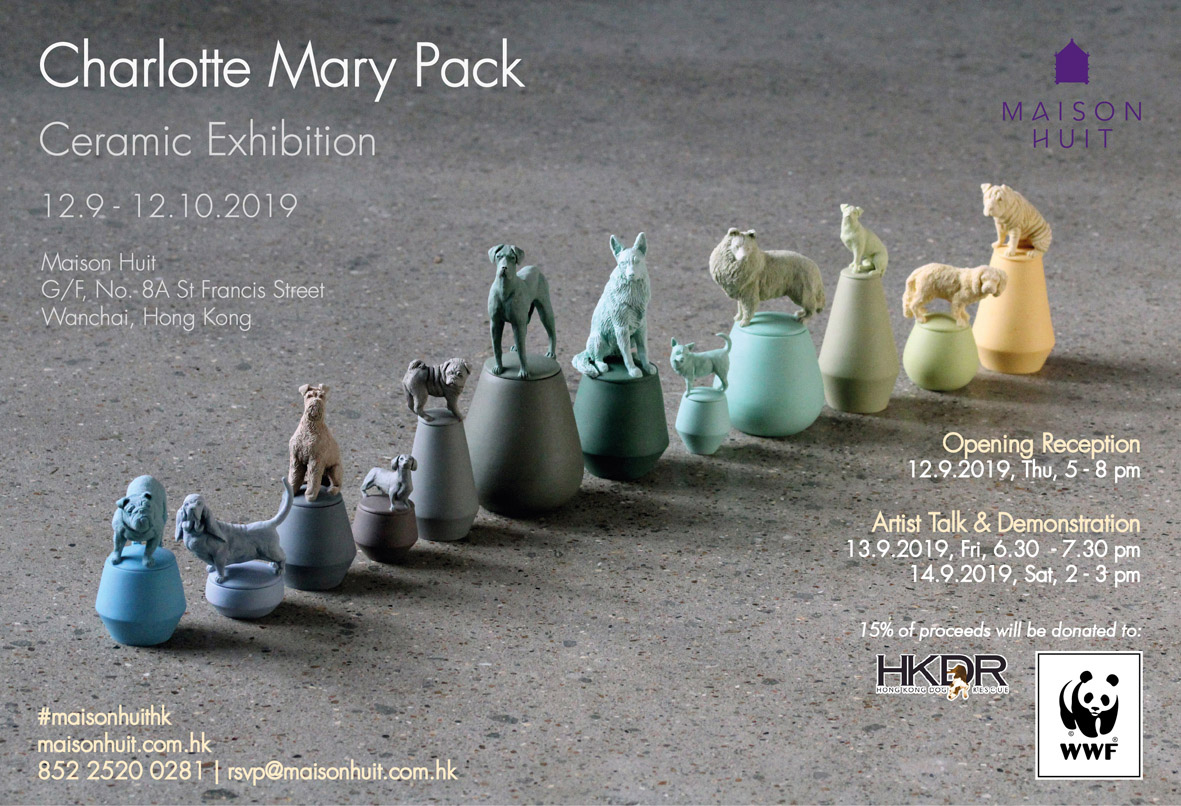 Hong Kong Debut Exhibition of British Ceramic Artist Charlotte Mary Pack Date | 12 September – 12 October 2019 Venue | Maison Huit, G/F, No. 8A St Francis Street, Wanchai, Hong Kong Opening Hours | Monday – Saturday 11 a.m. – 7 p.m., Sunday & Public Holidays By Appointment Opening Reception | Thu, 12 September 2019, 5 – 8 p.m. (RSVP essential) Artist Talk & Demonstration | Fri, 13 September 2019, 6.30 – 7.30 p.m. / Sat, 14 September 2019, 2 – 3 p.m.   Maison Huit is delighted to announce the Hong Kong debut solo exhibition of British artist Charlotte Mary Pack. This exhibition will include the artist’s signature ongoing ‘Species Pot’ series and a commissioned ‘Dog’ series that is created exclusively for Hong Kong. The exhibition will open on 12 September 2019 at our Wanchai gallery space with an opening party, followed by 2 artist talk and demonstration events on 13 and 14 September. To support the artist’s passion and raise awareness for wildlife conservation, our gallery, together with the artist, will be donating 15% of our proceeds to WWF – Hong Kong and Hong Kong Dog Rescue. Charlotte Mary Pack, based in East Sussex, graduated from Central Saint Martins (first class honors degree in Ceramic Design) in 2013. Since then, she has exhibited in group shows in London, Miami, Geneva and Paris. In 2017, her work was acquired by Musee ARIANA, Geneva, Switzerland. Growing up on a farm and traveling widely across Africa are fundamental experiences that have instilled her affection for the natural environment. The combination of both Pack’s love for all creatures great and small, and slay steers her work to explore different ways to draw attention to the declining wildlife and natural world. For Pack’s debut solo exhibition, Maison Huit has commissioned the artist to create a new series – the ‘Dog’ series, in which there will be 30 pieces of dog figurines and pots, each of a different breed, from cute little Poodle and Chihuahua to the handsome Husky and Great Dane. The dog figurines created by Pack shows intricate details including the carefully carved hair and eyes that look like they belong to a real living creature. These figurines crawl on top of the flawless porcelain vessels and each piece is finished in a matt and monochrome palette. A portion of proceeds from the sales of this ‘Dog’ series will be donated to Hong Kong Dog Rescue to support their program to help abandoned dogs in Hong Kong. Another collection on display in this exhibition is the artist’s signature ‘Species Pot’ series that she has been developing as an ongoing series since the beginning of her career. Pack creates endangered wildlife figurines and pots using the IUCN Red List of endangered species. Species Pots Series is an ever evolving collection no two pieces are the same. In small scale, each animal is meticulously hand built and carved to fine detail by Pack. On the underside of every piece includes the species name and its 'status' in the wild - Critically Endangered, Endangered or Vulnerable. It is important to be able to identify each animal - it provides an opportunity for you to explore more about the specific species and why it is under threat. A portion of proceeds from the sales of the Species Pots Series will be donated to WWF- Hong Kong to support their wildlife conservation effort. On Wildlife Conservation Day, 3 December 2018, Pack initiated a meaningful project that has successfully raised awareness for wildlife conservation. It is estimated up to 100 elephants are killed each day, driven by the insatiable global demand for ivory. Pack decided to stay awake for 24 hours, hand-sculpting 100 elephants in porcelain. Each piece made represents one elephant killed in the wild, creating a visually impactful piece that Pack hopes will raise awareness and challenge the public’s opinion on ivory. The collection of work was later exhibited at Saatchi Gallery, London. Through this exhibition, Maison Huit hopes to convey a message that art and our daily lives are inseparable, and art is a powerful channel of education and changing the world. Through her exquisite and meticulously handcrafted works of art, emerging artist Charlotte Mary Pack is making a strong statement to remind the world to be gentle and grateful to nature, and that each of us can make a difference.