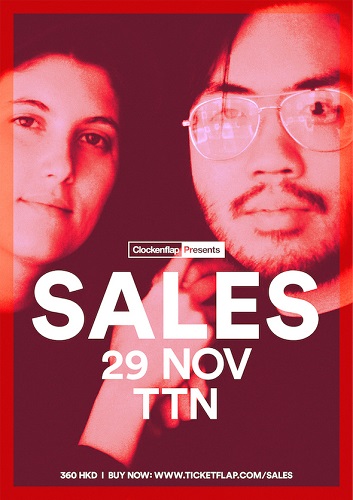 We are thrilled to announce that on November 29, Clockenflap Presents US lo-fi minimalist guitar pop group SALES, for their debut HK show.

Longtime friends and collaborators, Lauren Morgan and Jordan Shih formed SALES and released their first single “Renee” in 2013. The “SALES – EP” followed in 2014 (featuring single ‘Chinese New year’) before their debut self-titled album in 2016.  Their second LP “Forever & Ever” came last summer and the independent duo continue to self-release their work which is recorded, mixed and mastered in their Orlando, Florida bedroom studio.

Darlings of the indie blogosphere, they have headlined tours in the US, Canada, and Europe and now make their way to Asia for a string of anticipated dates.  The HK stop takes place on November 29 at TTN, with tickets on sale July 10 at 2PM.

Tickets: $360 from www.ticketflap.com/sales available from 2PM on 10 July