It’s a homecoming of sorts for Privé Group to head back to 60 Wyndham Street, the same location which the iconic nightclub Privé held countless nights of unforgettable (or rather, can’t be remembered the day after) fun and debauchery. This time, it’s less of a return and more of a new birth of Bungalow by Privé Group. The newly opened supper club is one part a deliciously intimate French restaurant, one part a super sleek nightclub and all parts awesome! ABOUT THE RESTAURANT Inspired by the joie de vivre of French culture and cuisine, Bungalow’s restaurant serves up traditional French fare that is both comforting as well as refined. Our head chef Steve Chou hails from two of New York City’s renowned one Michelin-starred restaurants, Public and The Modern and brings with him a skilled, sophisticated culinary technique that is bold and unconventional while still paying special reverence to the French classics. Some instant favorites off the inaugural menu include the Horseradish Velouté ($138), a refreshing stew of fresh horseradish, potato confit and Jambon de Paris, the Barley Salad ($138), a medley of pearled barley, marcona almonds and confit Taiyouran yolk and the mouthwatering Butter Poached Lobster ($478). The standout will have to be the Creekstone Farms Ribeye for Two ($798), served with Yorkshire pudding, mustard bone marrow and all the pretty dressings. A blooming wine list and cocktail selection rounds out the menu. The restaurant is currently opened for dinner and will soon be available for lunch as well. ABOUT THE CLUB With an area of 6,000 square feet, Bungalow provides customers a club experience unlike any other. The venue is fitted with the latest in entertainment production such as Funktion-One speakers, moving head spot lights, lasers and 4 wall-sized LED screens. The elevated DJ booth is equipped with three Pioneer CDJ2000 Nexus decks and a DJM900 Nexus mixer, in which is surrounded by a full service semi-circle marble bar. J. Candice Interior Architects is the vision behind the blue and white renaissance-esque design of the space, which features 14 VIP tables and 4 by-invitation only tables next to the DJ booth.

Currently no up and coming events 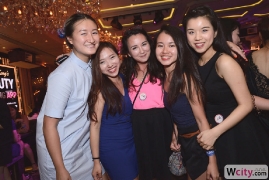