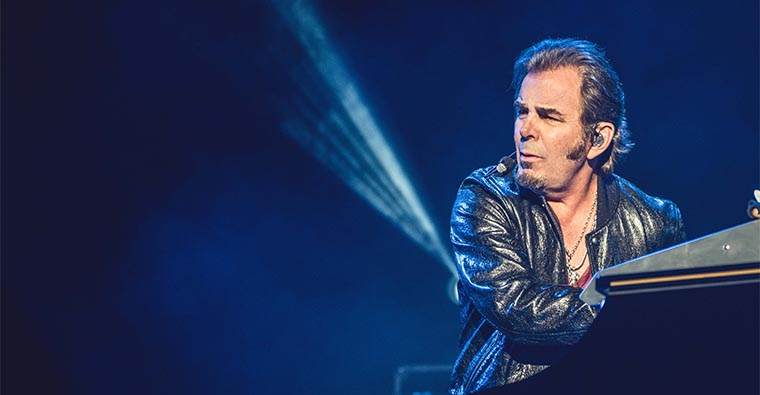 In April, after much demand for those who never stopped believing, Journey will be inducted into the Rock and Roll Hall of Fame. Astonishingly, this year marks the group’s 44th year together as a band. But, as even casual music fans know, it’s the near two decade on-off stint with lead singer Steve Perry (1977-1997) that cemented the group’s sound and legacy. None of the band members own up to knowing if he’ll show up on their proud day, but as ever, the door is open. 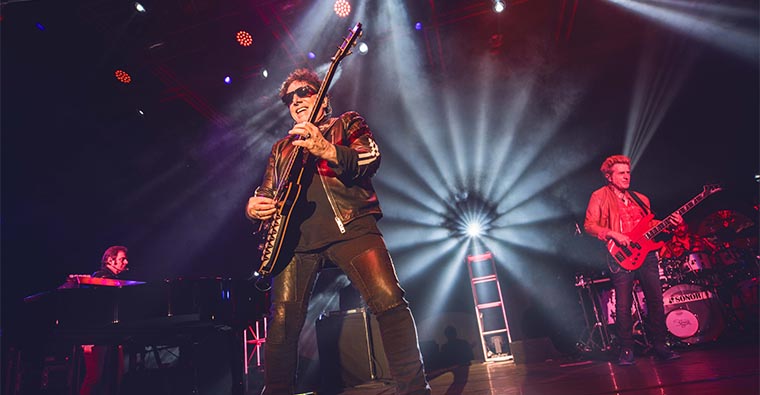 Yet, as keyboardist Jonathan Cain points out ahead of the group’s show in Hong Kong on Monday (February 13th), singer Arnel Pineda has been with the group nearly a decade now, and claims he’s given Journey “new life”.  Perhaps it’s no surprise that this spark has enabled guitarist Neil Schon to record again with Santana and spurred both drummer Steve Smith and Cain to release new solo albums. Cain even claims his latest solo album is a “love song to God”.

From his hotel room in Tokyo, he explained why during a lengthy conversation that covered everything from his proudest moments with the group to, if you can believe it, U.S. President Donald Trump.

First, congrats on being inducted in the Rock and Roll Hall of Fame. What are the plans for the big day?

Jonathan Cain: We’re going to have sound check. We’ll have rehearsal. I have family coming. It’s going to be an exciting day. We’ll be grateful and we’ll play three songs. It’s quite an achievement.

We were relieved. We won the popular vote and I want to thank all the Journey fans that really helped. It’s like hitting a home run. As you get older, you get a little more reflective and you understand the legacy a bit more. It feels really incredible.

Arnel’s been so good to you guys--a blessing. What are the chances of Steve Perry coming back for one last hurrah, and what would happen to Arnel in that case?

Cain: He would be welcome. The door has already been open for him (Perry) to sing with the band. We respect his lifestyle and his choice. There’s an invitation.

And what would happen if there was to be a tour?

Cain: We would share the stage (with Arnel and Steve)….that would be the way it would work. Certainly after being with us for 10 years, he’s (Arnel) earned it.

You’ve played Asia several times--once in Macau--and now Hong Kong for the first time. What do you anticipate/expect?

Cain: I think it’s going to be a lot of enthusiasm, we’ll see a lot of Arnel’s fans. We always like playing places for the first time. Three years ago we were in Singapore before 7,000 people and played in Sendai, Japan for the first time. We’re heading to Seoul, Korea too. Anytime you can break new ground, it’s great. It’s like the first time we went to Chile…

You’re all veterans. Do the songs give you new meaning after playing them so many times? How do you keep it fresh for yourself?

Cain: Through Arnel. He is a relatively new member after 10 years. He has a passion and verve. We try to make it different every night. We understand that people are here to see Journey and have the albums. When they come to see us, we play for our fans. It helps to watch him, and he can turn a crowd on with his energy. He’s a powerful singer. He’s really given us new life.

Now Neil’s (Schon) just been with Santana and you’ve recently done a solo album. What does all that bring to the table?

Cain: It brings musical diversity to the shows. We have identity outside of Journey and that’s important to express that and still be Journey. I certainly--it was an honor to make an album for the Lord.

I think Arnel did a solo album. Smith has a jazz career. We all have our side projects we like to do. We support each other. Neil’s selling his album out front. I’m selling my album out front.

Are there new Journey recordings on the horizon?

Cain: We’re going to start writing again. We have a good fan base. I feel like I’ve gotten my creative spirit returned to me. I’m ready to try some new Journey music and a new outlook. It may be a single or an EP. That’s what we’re thinking.

How do you maintain the Journey legacy?

Cain: When we’re inducted (in the Rock and Roll Hall of Fame) it’s a re-awakening in the spotlight and we’ll have a big tour after that. Our calling card is playing live. We’d like to do a symphony album. We got a little taste of it at the Hollywood Bowl last year. We feel that the Hall of Fame (induction) will put a spotlight back on the music.

Why has Journey endured in your mind?

Cain: Being a Christian, I have to give all glory to God. We had such a wonderful army of people over the years who marched to our beat. We had radio programmers who supported the band all the way through South America and Asia. The old school regime really cemented it. That took an army of followers for many years. Our promoters and managers -- they are all the reasons -- and we’ve been managed brilliantly over the years. The newest rendition of Journey started in 1998. It was an uphill battle and we prevailed. To have Steve Smith back  is great….

What are some of your own personal proudest moments and favorite songs?

Cain: Certainly, to sell out the Rose Bowl in the 80s was pretty mighty. To play with the Rolling Stones was a treat in 1984. Certainly getting the Billboard Diamond Award signifying 10 million sales was an honor. With James Hetfield, Jimmy Page and Kenny G. on hand, it was certainly the craziest group of guys you would want to hang out with. And finally, getting the Hollywood Walk of Fame and the popular vote for the Rock and Roll Hall of Fame. We have our share of milestones.
When it comes to songs, “Don’t Stop Believing” is mine. Any song that’s resonated and wins the hearts of the fans, I want to play that all day long.

What about a Journey song placement in a movie or TV show?

Cain: We haven’t had the best luck with that. The producers always bury our music. But when Tom Cruise sang  “Don't Stop Believing”, that was great. Also, if you listen closely in the movie “The Wedding Singer”, there’s a classical group playing “Don’t Stop Believing” during one scene. I love that!

You’ve recently released your latest solo album, you live in Nashville and you gave a “testimony” at Liberty College. What is your testimony?

Cain: My testimony is that we have a good God who will take the brokenness and turn it into grace. I was in a terrible school fire and got pushed from my faith. I came back to God. I found love, found grace. My story is one of forgiveness and true repent. I found salvation through music and I realized when my Dad passed away that I was playing to God. I share that testimony. Faith isn’t a perfect journey. God moves away and there are seasons where you are feeling strong and there are feelings where you need prayer. There is only one rock and that’s Jesus. That’s is the bridge on earth and heaven. I rediscovered that and wanted to make a love song to God because he has given so much. It’s time to give back.

Your wife (Paula White) recently spoke at Trump’s inauguration. How was that and what are your thoughts on it all?

Cain: She was the first female minister to ever pray for a President in history. I was so proud. I knew the prayer was going to really move people. I was with her when she was working on it. It wasn’t about politics. It was lifting up Jesus Christ at the moment.

It’s a process. He’s unlike any president we’ve had before. People have to wait to see how it turns out. He loves America. It will all get sorted out in the end. He’s running America as CEO and we have to give him time. We’ve been friends for over 5 years. Paula has known him for 15 years. I’m an avid golfer…and he’s built courses around the world over the years. He’s singlehandedly changed the world the golf. He’s a fun guy, loves God and loves his family.

He’s got a lot of layers to him and a lot of dynamics and he’s going to surprise a lot of people.

You have 24 hours to go anywhere, eat anything, see anything and travel is no object. Where are we off to?

Cain: On my bucket list right now is Jerusalem. I want to go to the Holy Land. I think I will find myself there this year. I think there will be some kind of resolve there, especially with the way the Lord has restored me over the last couple years. 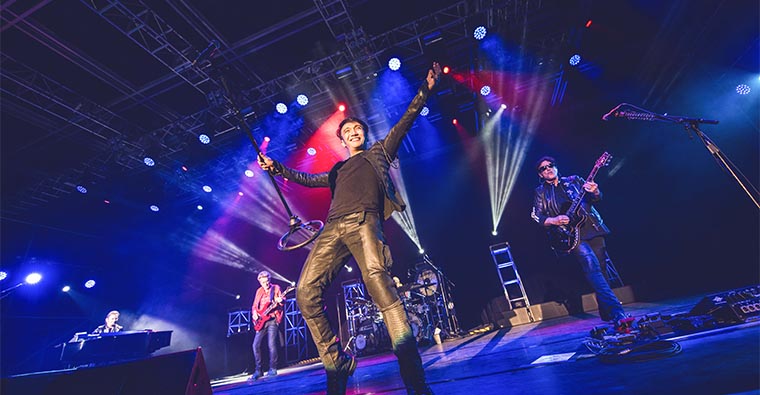 Journey will be inducted at the 32nd Rock and Roll Hall of Fame ceremony at the Barclays Center in Brooklyn, New York on April 7th.