Utterly amazed by the vibrant colors of the faceless figure bending down with countless cakes on his back just as I enter the gallery space; it does not take longer than a split second to realize that the Dreaming Rich exhibition will not only be offering aesthetic fulfillment but also deep explorations of the issues which the artist sees in the current world. 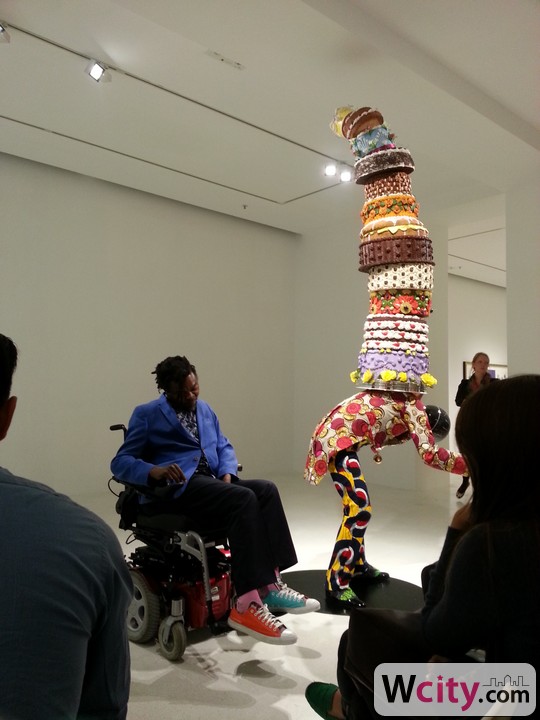 Well known for expressions of colonialism and post- colonialism through his works; Yinka Shonibare MBE depicts directly upon the Hong Kong identity with questions of cultural definition through his sculptures, paintings and usage of mix media. With a global phenomenon of mixed racial and cultural identities; it is no longer an easy path to trace back in finding definitive and origins. In representing so; Yinka Shonibare MBE uses the Dutch wax African batik fabric throughout his collections in representation of the re- appropriated identity Africans have gave themselves to this world through an Indonesian pattern but Dutch produced fabric. 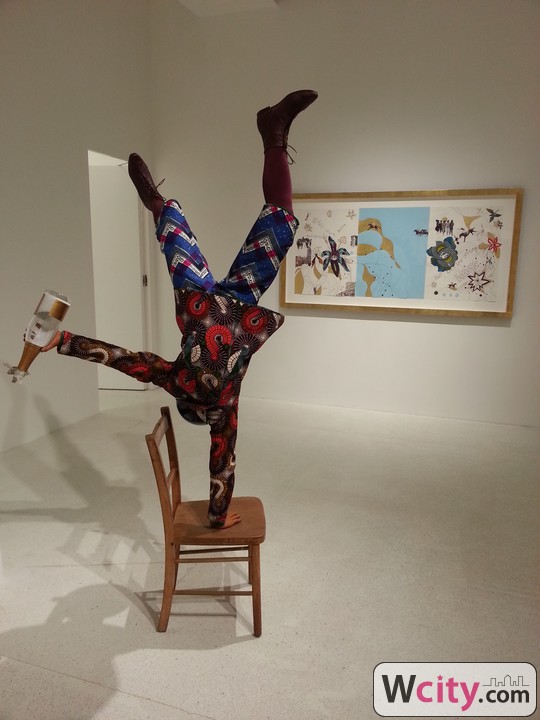 This multi- facetted connection fostered a ‘cheated’ identity for Africans; but even that has lost meaning in the contemporary context since individuals speak different languages and eat different cuisines on a daily basis in the current era.  In replacement, “Modern People” are now the main civilization on earth, and thus a new culture comes into domination; which makes it an even stronger decision as to why Shonibare sticks to the batik fabric as his iconic material for identity as it stands for the 19th century trading path between continents, when China and Arica is going through the growth of colonial practice in wealth and power. 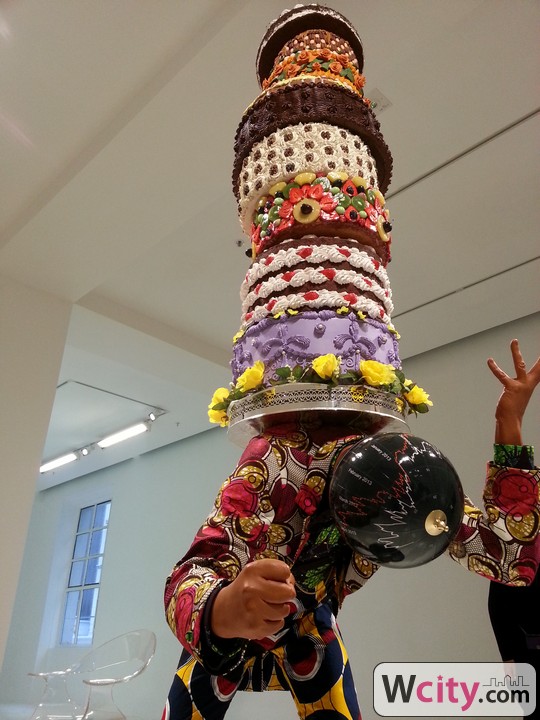 In no way far from our own experiences; his works for this particular exhibition is themed with the shadow of greed. Showcasing figures of different generations with the mannequin for Cake Man being the oldest; he is one of the strongest piece to represent Shonibare’s aim in offering aesthetic celebration with a sense of lightness to the viewers. Beautiful and attractive with the scrumptious cakes laying on top of the labored man on the one hand; it is also a truly horrendous and disgusting scene when such a surplus of life-size cakes are being piled up. The cakes can be accepted as just being cakes, but they are also a representation of desired things, and Shonibare is trying to comment about the contradictions in the greatness of owning something of desire, and owning too much of it which causes hardship and unnecessary pain of labor. 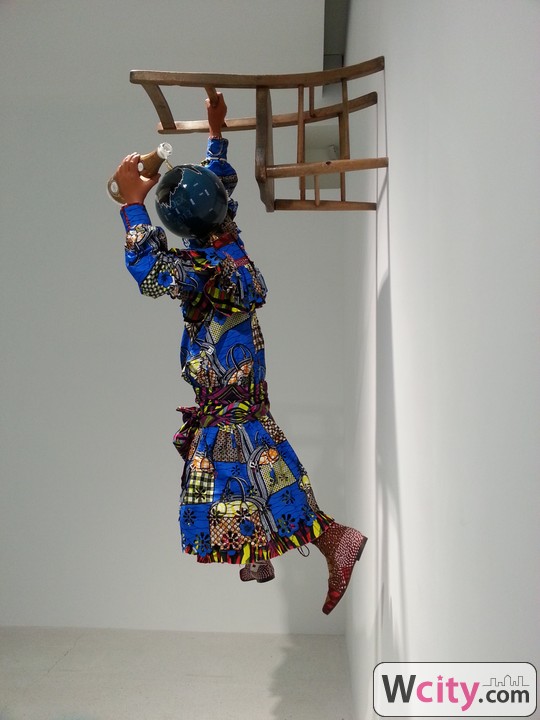 Shonibare always make his works to be about something, but something that is only representational and does not evoke any advices; which is why it is especially successful in captivating the attention of viewers due to its welcoming of interactions. Similarly with the Champagne Kid sculptures; the children are seen swinging from chairs and having fun with a bottle of Cristal. 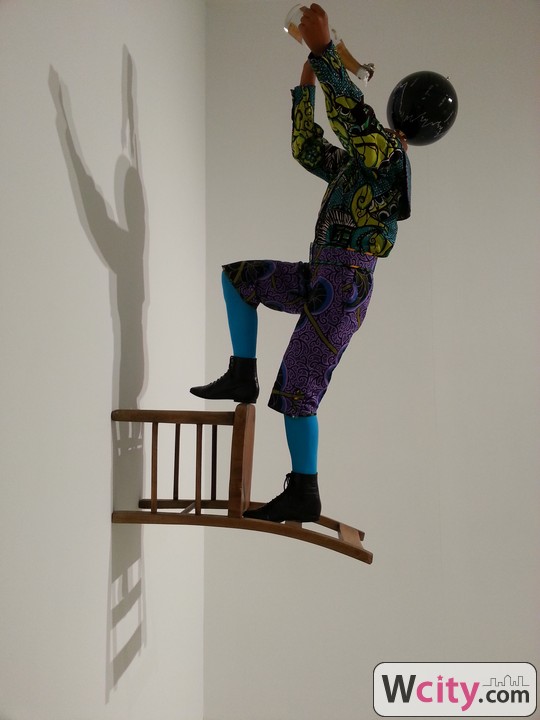 Their actions and the aristocratic costume fabric used gives off a fun humor to the piece at first sight; but on a deeper note, it criticizes on the corrupted French aristocracy in history with its choice of costume and the lack of head on the figures. The globe in replacement of the skull, same as the one on Cake Men reflects the stock market level during the financial crisis; which therefore clearly comments upon the power of the excess financiers across the globe. 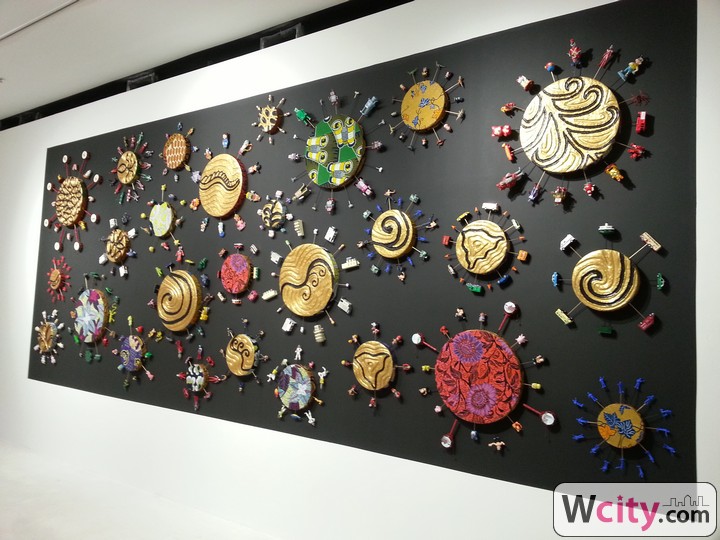 Apart from that, the Toy Paintings are also vitally insightful to the exhibition. With 27 round component on the 6 meters wide piece; each toy is collected by his assistants in Hong Kong specifically to reflect the local community’s childhood with their recognized characters such as Hei Yeung Yeung and Bruce Lee. 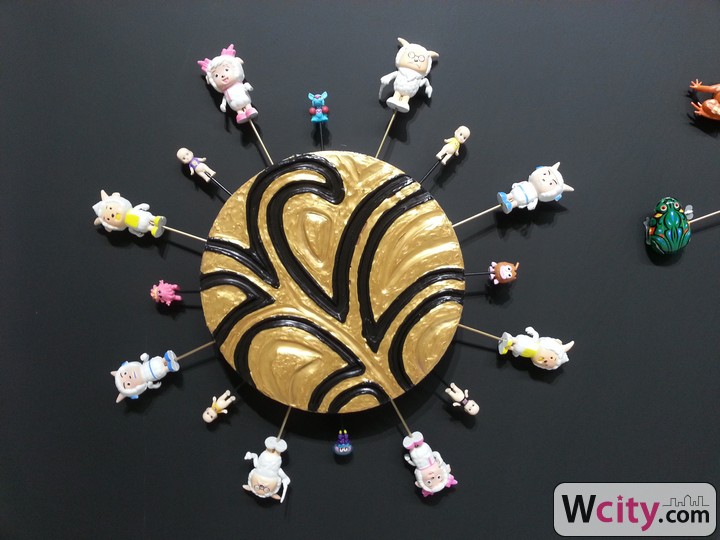 Not symbolic in any particular way, Shonibare only incorporated these aspects to involve the local community and allow them to find the playfulness within the piece before seeing the seriousness of it. 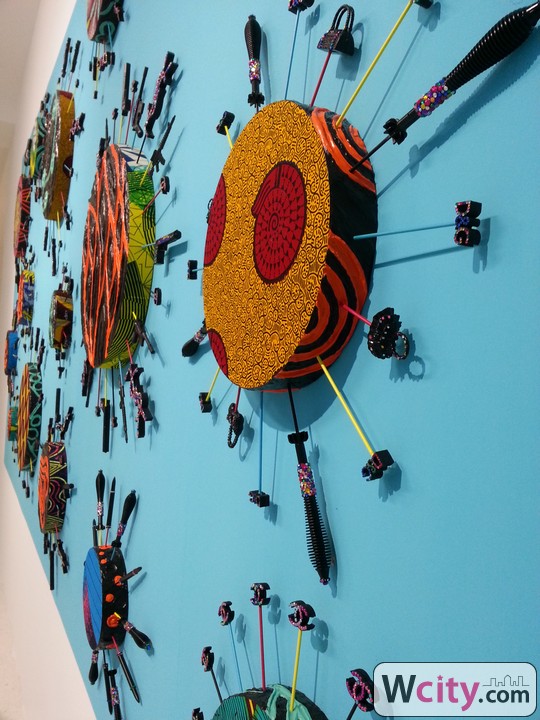 The fun factor is contradicted with the ideas of poverty and power; allowing popular culture to submerge itself into the high art realm through categories of Contemporary art. 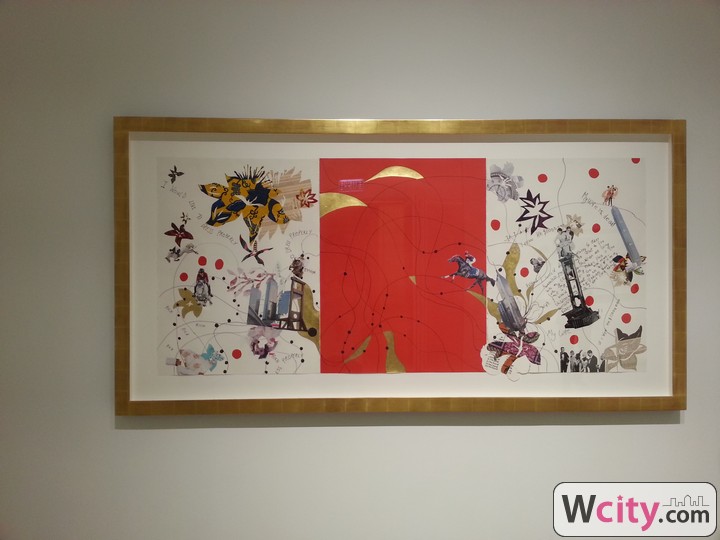 Shonibare sees art as a form of play, much like the masquerade or the carnival; where truths are being repackaged and staged for entertainment. With the pieces especially made for this particular exhibition; Shonibare has successfully transformed the space with dressed figures doing certain actions that subtly reminds you of your identity through the current surroundings of wealth, poverty, power and danger in this city’s colonialist history.