Romantic, static but moving with emotions; March Quinn’s expressions works into the mind of the viewers. Whether it be his previous sculpture of pregnant Alison Lapper who was born without arms, or his large replica of shells built with the technology of 3D scanning; they all represent his exploration into the relationship between man and nature and the intriguing question of where art actually fits in, as a creation or as a discovery. 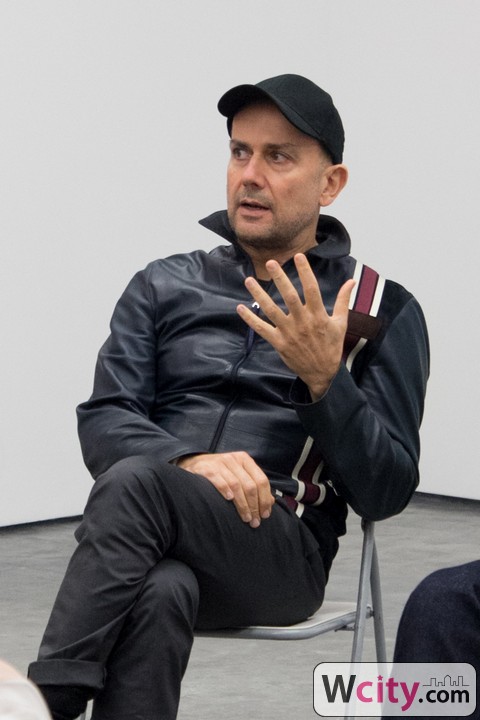 His exhibition at White Cube which just opened on the 8th of November also fishes into the curiosity of viewers, asking the same questions by welcoming us in observing the elements within his works in a closer detail. 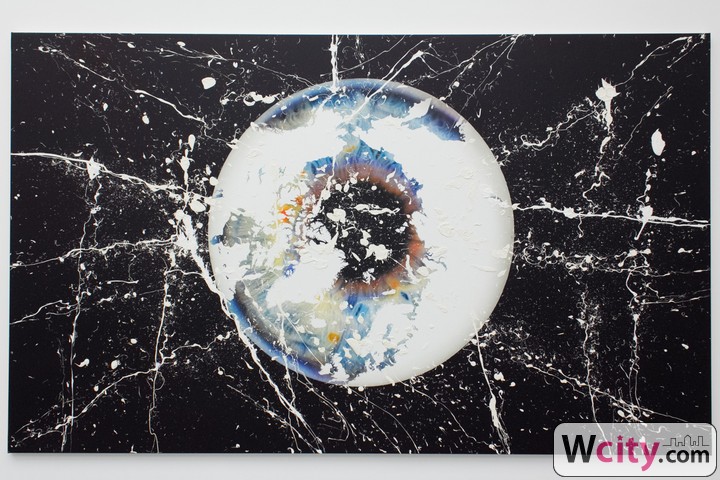 9 pieces within the exhibited collection displays the retina with an overlay of the world map, with their titles referring to terms like the inner eye, the elements of this world and its quality as a universal map. 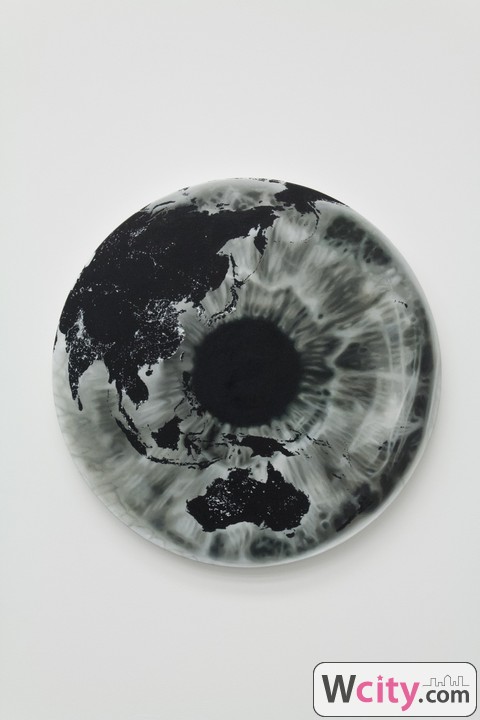 Marc Quinn explains that the iris symbolizes not only our conscious sight, but also visions that are somewhat force fed into our system by the efficiency of technology during our current era. 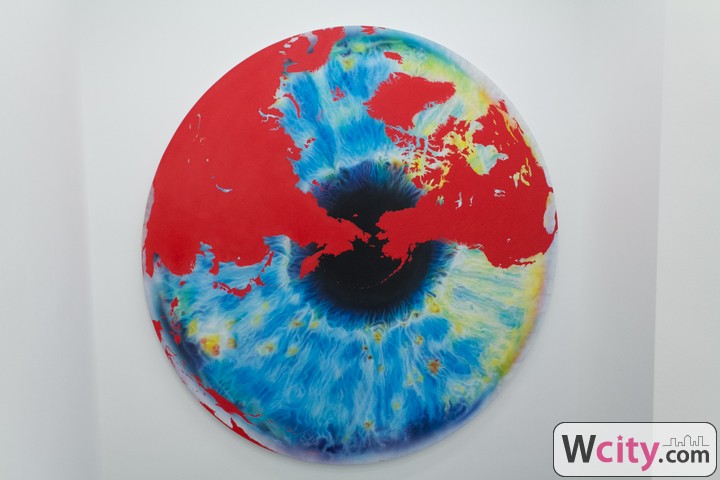 News, events and cultures from around the world is almost immediately being reported online, forming a structured network of communication without barriers from geographical locations, but also to an extent causes tension and pressure for people from the immense intake of information every day. On another thought, the works from this ‘Eye of History’ series also comments upon our interaction with the planet, our influence to the natural landscape as well as the aesthetic forms of a bird’s eye view of the world; condensing us all to nothing more than an abstract form of bar codes within the world. 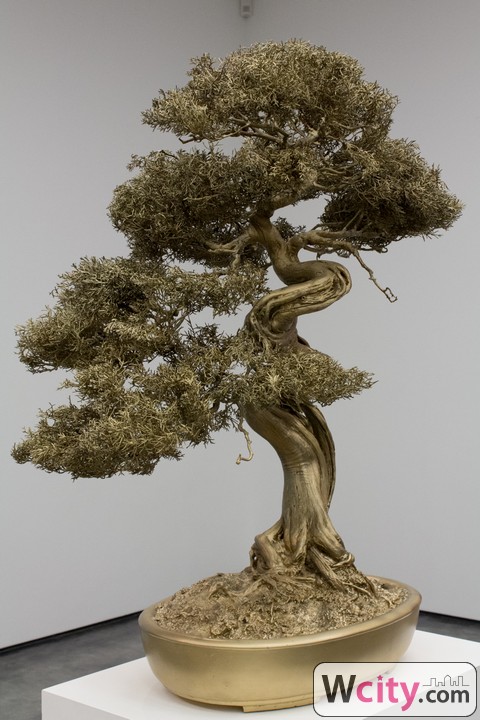 Not only does the artist assess the idea about nature in its geological state; but also the natural senses and urge of emotions which dictates our desires and how it contradicts with the world’s natural forces of gravity and growth. The 3D scanned sculptural piece Held by Desire made out of Lacquered bronze depicts a real bonsai tree frozen in time. Marc Quinn says bonsai themselves are a very interesting matter because it’s only a plantation that has been morphed by human actions to achieve a certain beauty, but a reality that has been contingently controlled through its placement in a forced pot, diminishing the chance of any further growth. Its presence is a result of the pure desire of control, containing the power of Mother Nature by implementing man made actions. So thus, if one sees the bonsai as a piece of art; is it created by the men, or discovered from nature? His other work, the Invention of Carving comments upon another desire of eating by depicting a piece of Spanish Serrano ham as a piece of marble. Playing along with the connotation of having a hunger and appetite for food in correspondence to having an appetite for art; he intelligently recognizes that food is most likely the first manifestation of art in human history. 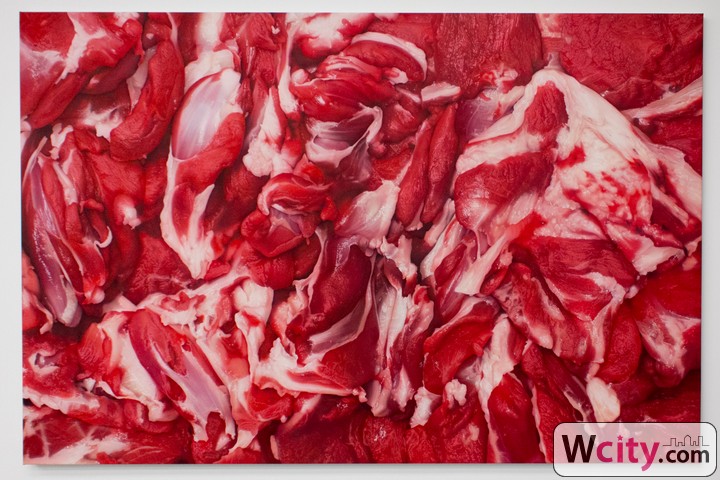 Doubtlessly, it is a natural instinct to consume food for survival, but has one ever evaluate why do we carve and reshape a piece of ham during consumption? For an artistic urge, or does it allow us to dematerialize and fix the state of food for our consumption? One of the most easily neglected but most moving piece for me is the shell sculpture ‘The Architecture of Life’ that is places outside the gallery in the building’s foyer due to its size. With references that is imprinted within individuals familiar with art history and the paintings during the Renaissance; a shell symbolizes rebirth and Venus and is a component often spotted in the background of mythological paintings. However, Marc Quinn analyses this form with a much scientific attitude. The shape of a shell is naturally pretty, but one must realized the contradiction in the fact that this object is made by tiny creatures which encompasses no intellect at all. Also, when we view a shell, it’s like looking up at the stars; because we’re seeing something that is actually in the past. The rings on the shell depicts the passing of time, but the reflected image from the shell is of the present; creating a very interesting comment on the archeology of time. 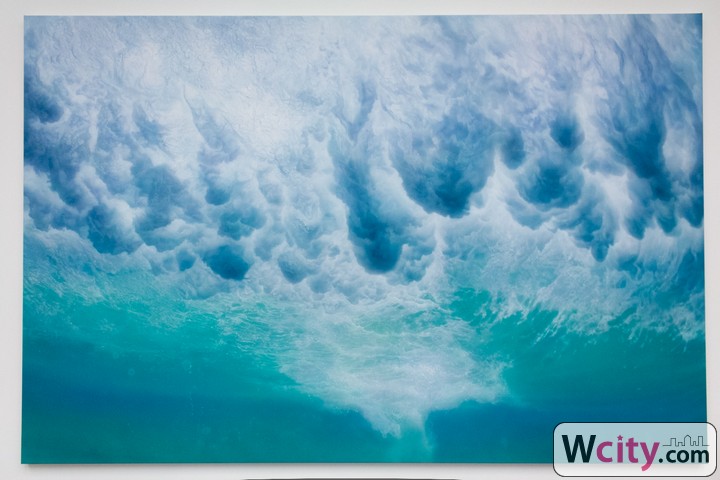 With artists and scientists constantly fighting each other whilst trying to define certain occurrences; Marc Quinn who has a scientist father has a different approach to the two form of knowledge. He sees them as completely different ideas; and exclaims to us that “Science is looking for answers; whilst Art looks for questions.” With him embracing technology, especially highlighting that the impact from 3D scanning would be as phenomenal as photography when it was first introduced to the art world; all we can conclude is this artist is destined to surprise us with his concept, mentality and question raising nature of his artworks. Thrill yourself with more unsolved mysteries by going to Marc Quinn’s exhibition at White Cube opened to public from now until the 4th of January.