The Space up on Hollywood Road has always been known for its constant holdings of the cities’ latest fashion previews, art exhibitions and cultural related events; but never have I seen it being so beautifully infested with working artists sitting against their wooden made tables with classic red blue and white plastics covering all over the floors. 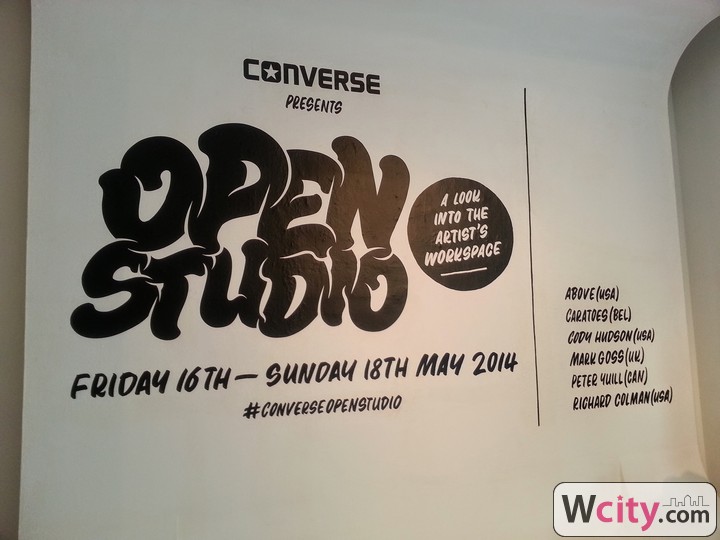 Converse is doing it again. After their previous splattered paint inspired collections and rebellious tagline; they are hosting an open studio right during the times of Art Basel Hong Kong this year, and am tagging the brand with 5 international talents who are active in creating art around the world. 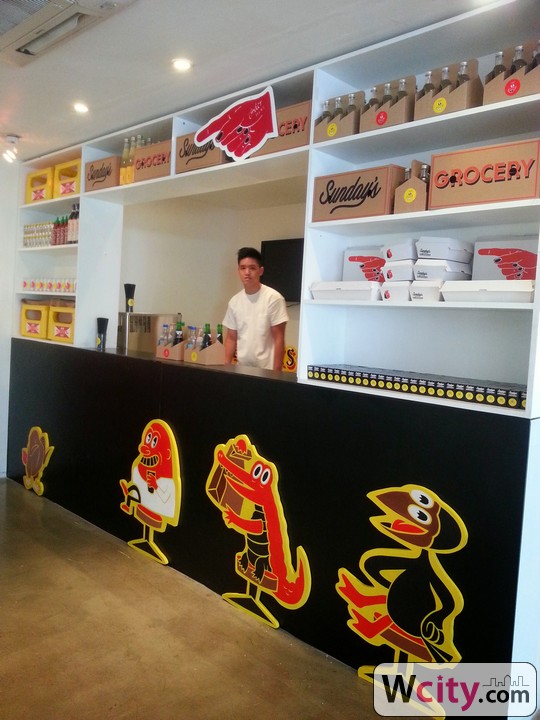 Firstly welcomed with a pop up store within a pop up exhibition; drink and snacks serving party Sunday Grocery kick starts the atmosphere with their Vancouver artist created graphics in reds and yellow. 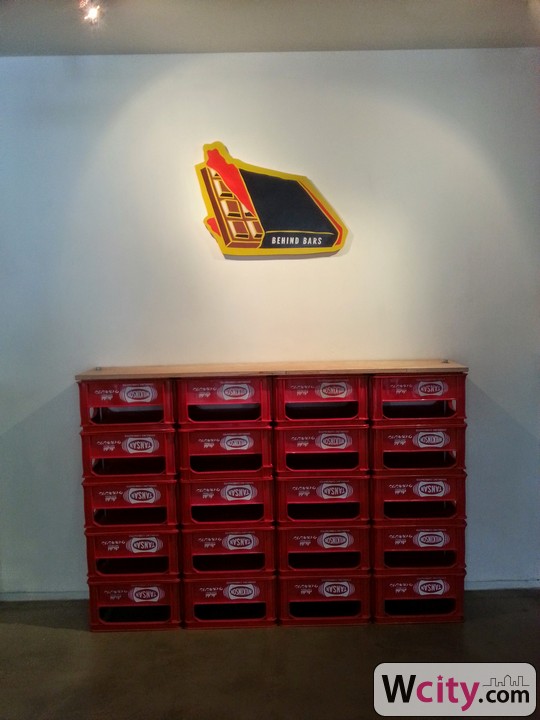 Eye catching like a 3D pop art installation itself, the brand will be opening their first store in Kennedy Town this Sunday, 18th of May 2014; find out more about them here. Sipping down some ice cold Japanese Ginger Ale offered from Sunday Grocery I then trekked into the space of head down artists who are all doing their own thing in their very own corner. 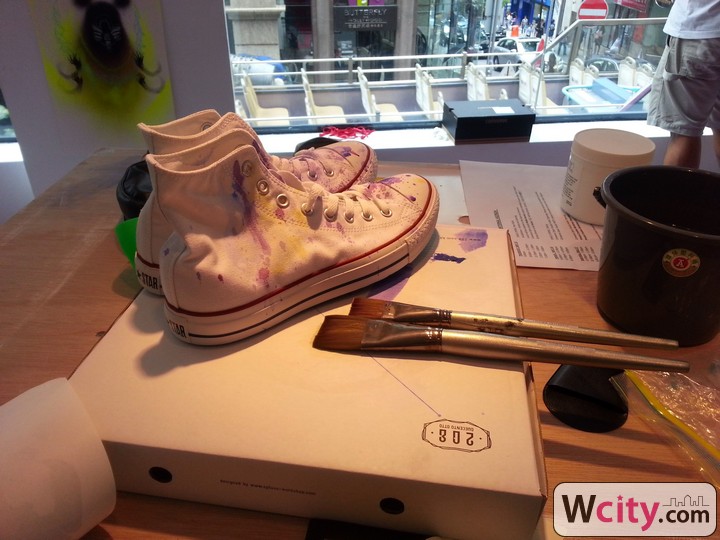 With names like Above, Cody Hudson and Richard Colman from the States, Mark Goss from the UK, Peter Yuill from Canada and the only female artist here Caratoes from Belgium; the room was filled with paints and inks and energy that vibes through the air with their action as well as the being drawn on Converses that lies in progress on their tables. 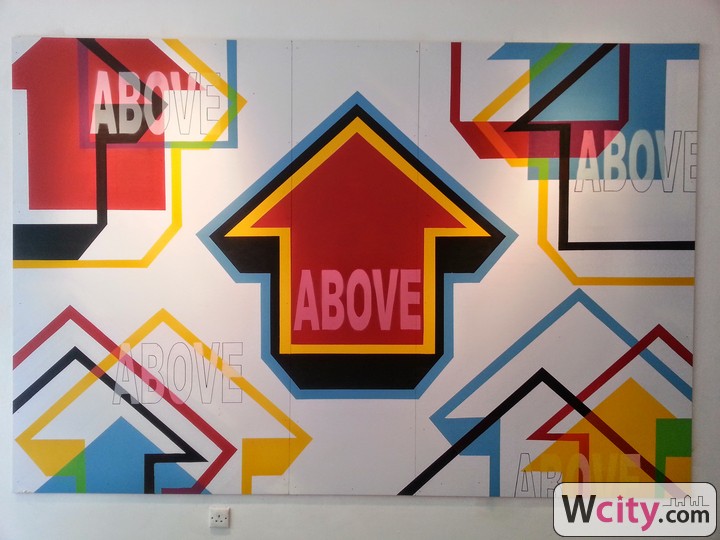 Above, famous for his colorful arrows that are stenciled out in the streets is a very politic and social aware artist. With large mural size paintings that feature texts; his works are spotted in more than 100 cities around 60 countries in the world. 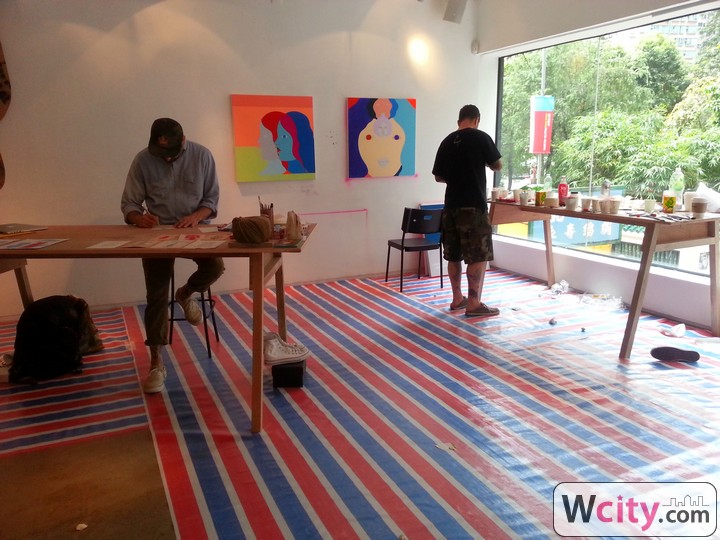 Cody, aka Struggle Inc. works not only in the states, but has also exhibited around Europe and Japan.

Recreating art pieces by working with found objects; Mark Goss started his career in Antwerp and has worked around places like London, Roterdam and other European cities and been collaborating with brands such as Converse, Lane Crawford and Fujifilm just to name a few.

BAA graduate in illustration, Peter Yuill from Canada have grown up as a graffiti artist and is passionate about the streets and factories. Having won the Hong Kong Young Artist People’s Prize in 2014 and the American Illustration 27 Chosen award; he has also worked with brands like Kronenbourg 1884, Converse, Veuve Clicquot, Evisu and WeSC.

Richard Coleman is a San Franciso based artist who uniquely blends characters within abstract geometric patterns on the canvas as well as in installations. I had the lovely chance to talk to Caratoes in learning about her background and the reason why she decides to stay in Hong Kong instead of in Belgium where she grew up. A very friendly and bubbly character; she plays around a lot with mixed media, as proven with the wide variety of tools she has on her table. 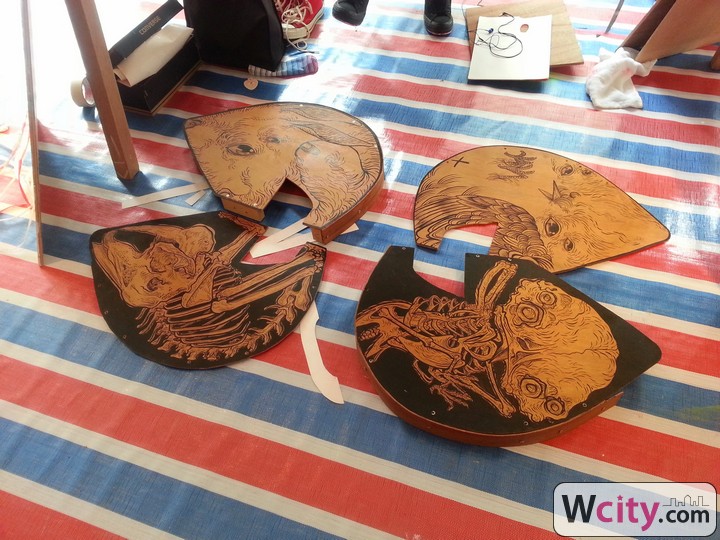 Mixing ink with spray paint and sewing threads; she exclaims it all started with the art of graffiti. Moving to Hong Kong with some saved up money, she decided to pursue her art career here in Hong Kong because Belgium was “really boring”.

Quite an opposition as to what we usually hear from local artists who are striving to exit this city for more creative inspirations; she is now a successful full time artist based in Hong Kong and loves the chemistry here. With a sense of elegant and gentle beauty within her carefully outlined works, the collections she produces deliver a certain atmosphere of duality. Having worked with major clients like Nike, Four Seasons Hotel and Absolut Vodka just to name a few; she tells us that she is excited to work with Converse and am especially happy with the pair of hidden wedged Chuck Taylors’ she has received, giving her some extra height with no stress. 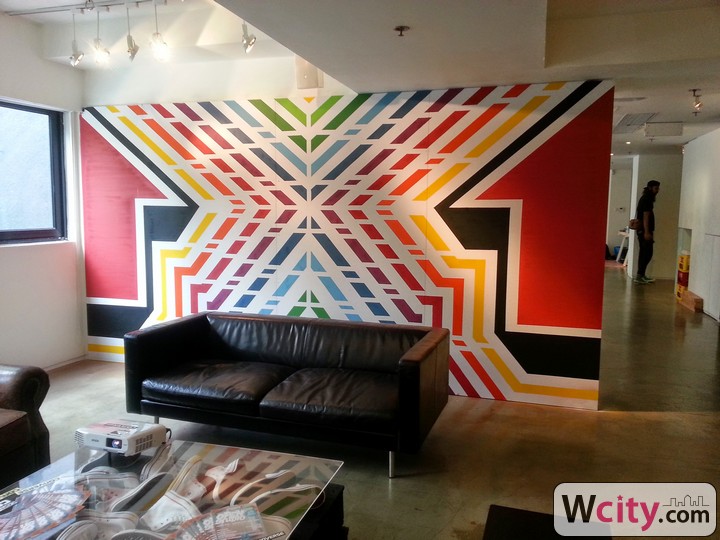 Apart from having the chance to see these artists and their works, which are on sale during the open studio from the 16th to the 18th of May 2014; there is also a Hangout area for guests to relax and mingle whilst being presented with special insider videos and real time updates. 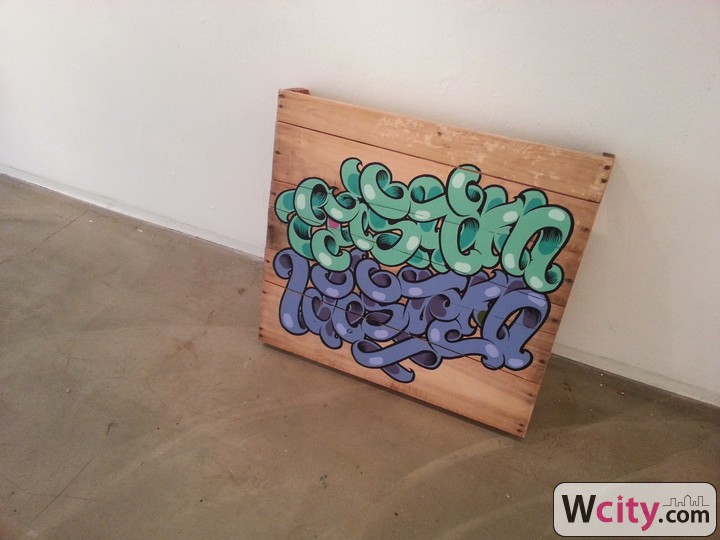 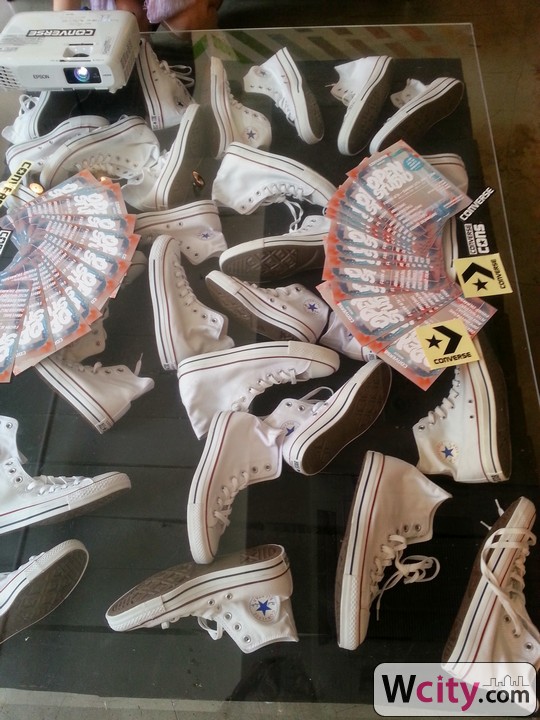